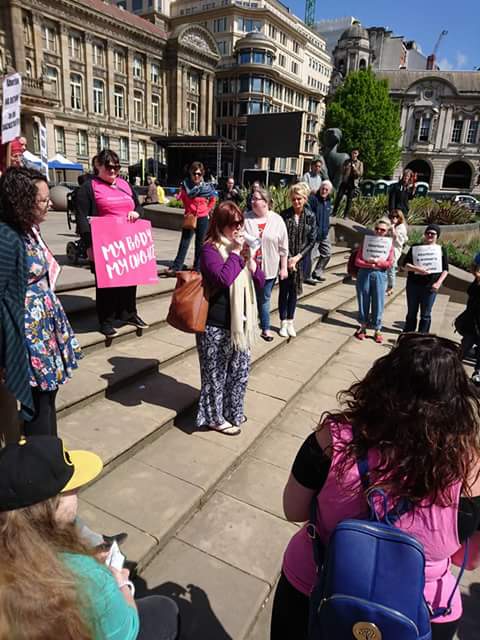 In this week of unfolding dystopia, there is a lot going on.

I was gutted not to be able to attend the women’s march last Saturday and very grateful for the sisters who marched for me. The global women’s marches completely caught much of the left on the back foot. There has been a general antipathy and some antagonism towards the Hilary-defending of liberal feminism. I share the frustration that she was a terrible neo-liberal candidate in a time that demands radical alternatives, though at the same time mocking women by saying “no, it wasn’t because she was a woman” is reductionist, divisive, and ignores the wider problem with the left and women.

I’m not a liberal feminist. I have solidarity with liberal feminists in very many struggles but I don’t see a reformist approach to gender inequality which trivialises economic oppression or attempts to take economic oppression of women as an isolated part of the class system that can be used to fight for gender equality as a holistic or workable direction to travel on.

I am a Marxist feminist, so I believe in class ceilings not glass ceilings. I get that women in the middle classes are massively frustrated by being overlooked for promotion and to a point as a member of a democratic union I will always join the fight to highlight and try to remove these barriers. But other than in a broad trades union context it doesn’t resonate with my world. When you have faced economic struggles that go beyond promotion opportunities being thwarted to family survival it can be incredibly alienating and painful to hear the liberal feminist line on glass ceilings and promotion even though you know that they are right that it is a massive injustice to have gender inequality in the push to get to the top. My world involves women (and men) at the bottom and many of them have aspirations to rise up which hit barriers way below the glass ceiling. Even beyond that, I don’t think that structually fighting the glass ceiling will ever work because it is a model which retains the hierarchies that keep women, as an easy target for economic oppression due to childbearing and other physical differences, at the bottom. The solution for me is the picket line, not smashing through the glass ceiling.

And of course on a personal level as a union rep who deals daily with the impact of management at its very many levels I can see that there are “shades of manager” between decent people and outright bullies, but the role itself for me is oppressive.

I think this is at the heart of the complexities of organising a broad movement which unites liberal feminism and class-first activism.

That said, there are a lot of points that get missed in a of this building a broader movement business.

Firstly, it is pretty unusual for feminists to be solely liberal. Most who focus on the glass ceiling approach both feel frustration at incidents like Hilary not getting elected, women not leading the Labour party (and I think we should be very clear that most of the most outspoken feminism in the Labour party is liberal feminism) etc whilst still recognising women at the bottom get a raw deal. Some have nuanced and ambivalent views and others just believe really strongly in the power of women in leadership to make a difference and raise everyone up behind them. Liberal feminists are intelligent and caring and they don’t need patronising by the left as a way of changing their mindset.

The second issue is the problem the class-first left often has with feminism itself in unfairly categorizing women’s activism as the property of liberal or radical (not even going to go into them right now!) feminists. The assumption is that feminism is a bourgeoise movement in the right direction which needs to be utilised to build the class struggle. Women’s liberation will come through the overthrow of the class system. This is not just patronising and reductionist, it ignores the incredible work of intersectional feminists who identify and challenge privilege at every level of activism. It’s not enough to say affluent and educated women need to recognize their privilege and get behind the class struggle: class first leftists need to hold a mirror up to every level they operate at and look at how not just class but gender, disability, ethnicity, sexuality and all the other broad fronts the left fights on externally also need to be recognized within. You can’t just treat a women’s uprising as political capital and explain the strategy for the direction you believe the left can push the movement towards: you need to recognize that while many middle class women marched so did working class women, black women, lots of women who are already fighting for the things you want to achieve, and that these women have firstly agency but secondly shared struggles that the class-first left has not at this point presented itself as addressing.

With these points in mind, one key arena where the movement can strengthen its interconnection and solidarity is abortion rights. This needs to be a global fight back, not as a means to bringing people to another cause but of itself.

If you believe in class first and solidarity with women’s liberation, think on this. Yesterday Vice President Pence became the first VP to address the US March for Life in Washington. At that event he promised that Trump would remove the funding for abortion in the US. The only abortion funded in the US takes place through Medicaid where the woman’s life is deemed to be at risk. So Pence effectively proclaimed a death sentence for women in poverty if they seek out an abortion. Alongside this, Trump’s move to cut any funding globally to health programmes which even suggest abortion as part of wider reproductive choice gives an additional death sentence to women in impoverished and or wartorn countries. This is a women’s issue and a class issue and it is about them killing us.

While I have focused on the complexities in the left of uniting movements with shared goals but different ideology, there is another issue to be addressed in this call out to support the pro-choice fight back.

Pro-choice is not pro or anti abortion. It simply means respect for women as rational decision makers. Many women (and men) are anti-abortion on a personal level whilst supporting choice more widely. This may be because they see the evidence that clamping down on abortion economically actually increases abortion rates, especially if it comes hand in hand with hard-core conservative refusal to engage in promoting or funding contraception. Or it may be because they see their religious beliefs as personal whilst respecting wider democracy over theocracy. If this is you, please support the pro-choice fight back.

As a Marxist feminist, I also think we need to look at how austerity and attacks on the NHS restrict choice too. Just as every woman should be able to freely access information about abortion and abortion itself, women who want children are having that choice taken from them by our society. Support universal free childcare. Support action to tackle child poverty, lone parent poverty, family poverty, and of course fight to defend health and education if you really believe in choice. Fight to defend our NHS, fight for Sure Start, fight for a national education service. Fight academisation, grammar schools, private schooling and tuition fees. Fight for every child to get a fair chance.

On 20th May this year the annual March for Life takes place in Birmingham. Birmingham is specifically targeted because it set up the BPAS. You can find out about joining the counter-demonstration here, and I urge you to do so. Just as the extremism of groups like the EDL bring large mobilisations on our streets to protest the message of intimidation, so should a mobilisation against women’s agency. Which means all women, not just the liberal feminists who have given so much energy and activism to this issue. It is a necessary part of a global fight back.