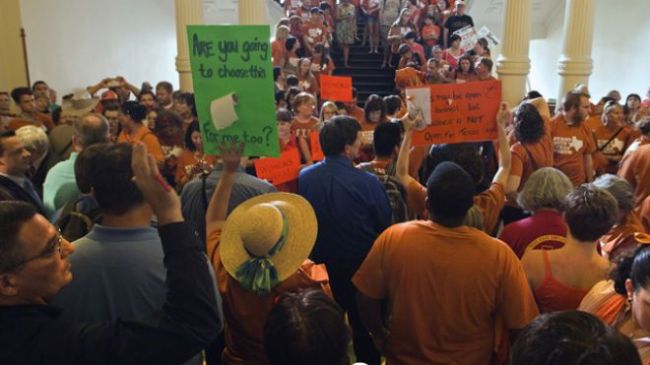 This morning I got up to the news that US sisters had successfully defeated the Texas abortion bill, which would have led to huge complications in terms of accessing treatment for many across the state along with bans on all later term abortions, including those where rape and incest has taken place. It was great to see that along with the heroic 11 hour filibuster from Senator Wendy Davis, the defeat of the bill involved direct action from thousands of supporters who flooded the hall, chanting “Hell no, we won’t go!” as the last few minutes passed. While news reports are predictably filling up with “liberal” distaste at the use of stalling and “mob rule” in politics, it’s a reminder that democracy is about getting voices heard – and that when the systems are stacked against us in terms of autonomy in decisions involving state rule of our own bodies (or any decisions “about us without us”), mass mobilisation is part of our strongest armory against the smoother power weighted systems that pass as best fit representation in the 21st century.

It seems like, similar to trades unionism, a lot of Western feminist fights these days are about vigilance and claw-backs rather than making inroads. Davis and her supporters’ fight was against retroactive changes – previous drives by the democrats to highlight the clear evidence that education and contraception are the way to cut the rates of unwanted pregnancy, not abortion law changes, were thrown out. While those with privilege of feeling heard in the current system are reflecting how very undemocratic political decisions involving mass action and filibusters are, we need to think about what the evidence tells us. Criminalise abortion, and you just raise the rate of illegal, unregulated, dangerous abortion. You put women at risk.

It may be a while since we last read Dorries proclaiming the need for abortion changes in the UK, but the wider picture is that our daughters are growing up in a society where the curriculum is being ironed out to reflect a white, male, imperialist vision of what legitimate UK culture and knowledge is about. It can only be the breeding ground for a future generation of conservatism unless we make the argument about the alternative loud, active and successful. Cuts to services and jobs which hit women hardest make the unspoken comment to girls as they grow up that they are fundamentally and unquestionably less important within society and less able to make decisions about their lives and their bodies than the “natural” democratic representatives in Westminster.

There is some great work being done by a young wave of feminists in the UK today focusing on bodily autonomy. They are taking on the tabloids, the retailers and society in general to demand that they will not accept objectification as a standard part of the landscape for young women, and they are campaigning hard and well. But there is a danger that if we don’t double up that effort with a political economic fight, the battle is automatically lost. Women of the future need a society that teaches them that their body is their own, and that decisions about their bodies belong to them. But I believe this empowerment can only really come fully in a wider emancipation – an economic emancipation in which participation within society is not restricted by the white, male, able bodied bindings of austerity. If we want women to really be free, we need to not just talk or write about the ways in which the politics of economic conservatism are shifting the landscape against them – we need to act.