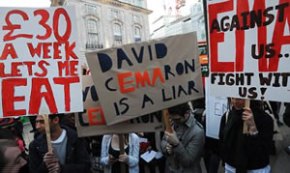 This week thousands of students and UCU activists across the UK have had a week of action in the ongoing campaign to bring back EMA. Student activists in Colleges (including Dudley and Stourbridge) have been running stalls and using social media to share petitions and encourage people to lobby their MPs to sign the Early Day Motion calling for the grant to be returned.

When I first started working in FE in 2005 EMA was helping over half a million students from the UK’s poorest families to stay on in education. This worked in a number of ways. The allowance meant that students could get up to £30 a week which could help with costs for transport, resources such as books and stationery, or any other bills.  As well as this, it provided a strong argument for kids who wanted to carry on in education who might otherwise have to go straight in to full time employment at 16.

Now, of course, the option of full time employment isn’t there for many. In the black country young people are twice as likely to be unemployed as the national figure.16 is a very young age to already be experiencing the repeated disappointment of competing against hundreds of others for jobs day after day. EMA could help widen the opportunities for those who are trapped in this, allowing them to develop their skills – meaning more jobs are opened up as possibilities, but also meaning people who could be the future in terms of driving the UK economy forward are not being shut out before they even get as far as FE.

You can find out more about the campaign to bring back EMA here.